October is going by and still without a single post in here... Shame on me!!!
Truth is I haven't been sewing as much as I'd like to, still I did finish a very cute project I had on hands: G.'s new Winter outfit: 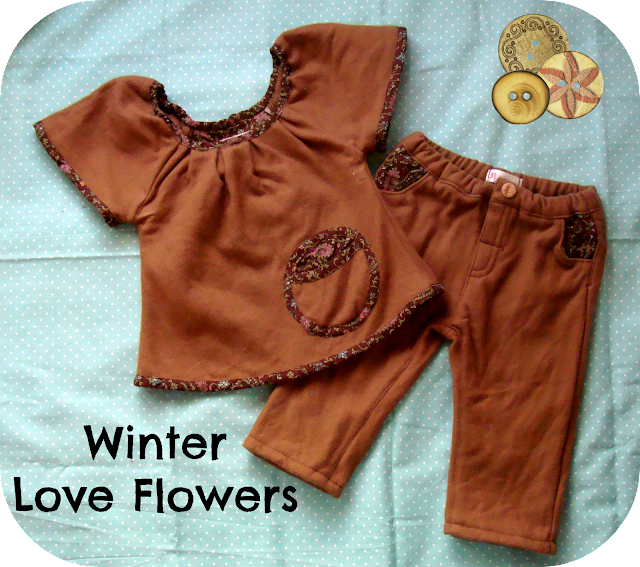 So, let me tell you all about it.
Baby G. has this so-very-cute t-shirt that I just love-love-love, and one of these days I was staring at it and feeling sad that one day it won't fit her anymore, and that day would be pretty soon, she grows fast.
So, I took that original t-shirt and draft my own pattern. I had to consider that the fabric was much heavier and I would have to make it bigger. So, just copying it wouldn't be enough.

It was a hell of a hard work but I made it. I had to make some adjustments but it turned out better then expected.
I loved how it turned out. Did I mention that before?! Adding the rounded pocket wasn't planned but I had fabric left and wanted to add something different, somthing me to it, so the pocket it was!

But after the tunic was done, I wasn't happy enough. I still had lots of this brown fabric left but very little of the one I used as bias and decorations. I wanted to make something out of the brown fabric still, and my mother was to one to suggest: make her a matching pair of pants.

Firstly I doubted it. I thought the fabric would itch, but mom was right... it's a heavy fabric, to wear on very cold days, so she'll probably be wearing it with a pair of collants underneath, so, why not?

A new pair of pants it is.

Not that she would need it, she's been given lots of clothes, but mommy here just lovessssssss to sew for her, what can I do? And besides, there's way too many fabric on my pile right now. I have to start using them all... which I've been trying for almost a year. lol.