What's a lady without her bag?

So before September ends, I should share a few things I did while it lasted.
I made a new bag. I decreased a pattern I had used a few times before to make this one smaller. I also made it with two small handles. 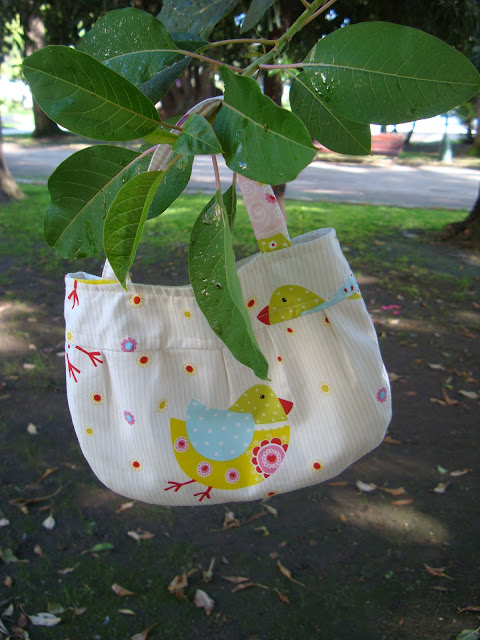 The previous one I meant, was this one: 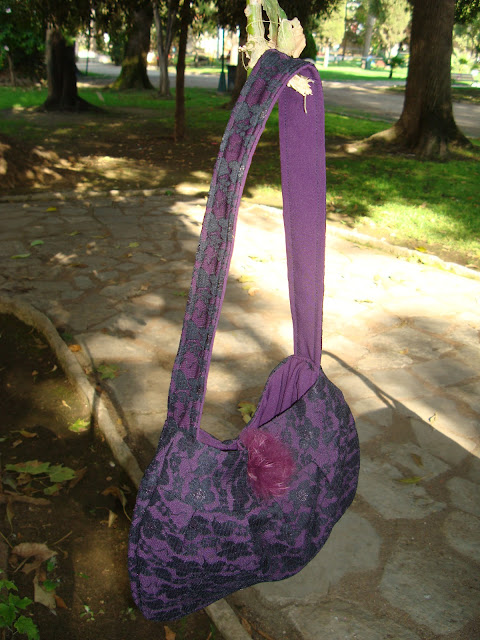 Covered in lace, bigger than the one before, closes with a clip. No inside pocket like the smaller one. One only bigger handle. This one was made like 2 years ago actually, and I never used it.

I also made two small clutches, using a free pattern online (click here). Here they are: 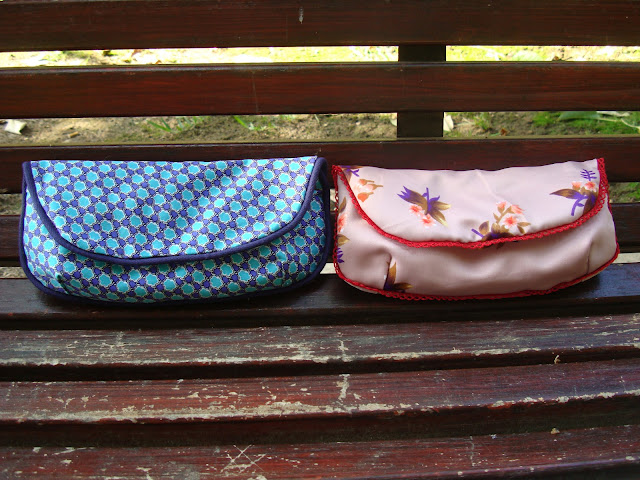 I loved them so much! I want to make a few more, I have a few ideas to make some original ones.

Yesterday I finished a new tunic for little G., and today a new bag organiser, but that will be shared later!!!
October is coming, that's my month, so let's enjoy it!!!
at September 30, 2012 2 comments:
Email ThisBlogThis!Share to TwitterShare to FacebookShare to Pinterest
Labels: Bags, Girl, Mom's

Yes it does. And it feels good.

A few weeks ago, I FINALLY finished my Tilda Santa Claus. I started it about a year ago now. I wanted it for my last Chritmas, but it wasn't possible to finish on time and then I just kep postponing. I would look at it and think: it's still a few months to Christmas, and there's this or that to do first. And it went like this for almost a year.
But it's September. It is that time of the year when I start thinking about Christmas and making deco items and gifts for my dearest ones. Somehow I am even more enthusiastic about creating seasonal items than I had been before, so here's a bit more of my finished Santa: 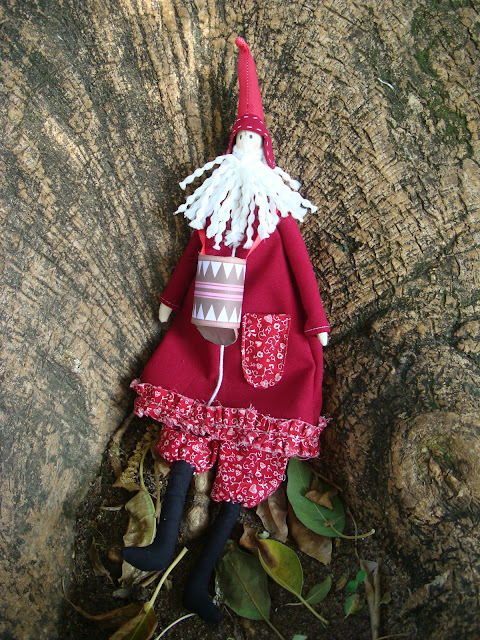 I can consider this a little refashion too, because I used an old red corset (I had made long ago) for the Tilda's clothes. And yes, I did cut a corset to make a doll's clothes if you're wondering. I didn't wear it for years because it's ziper broke... And I just new I wouldn't be fixing it so soon. 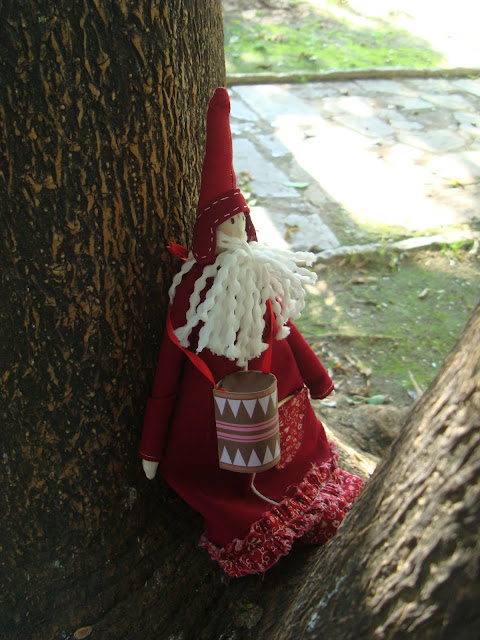 Painting ain't really my thing!
But I had some fabric paint, my mom has left here from when she painted G.'s birthday banner. and I had a friend coming to my town, with her lovely boy. She's actually an e-friend and it was the first time my family met hers.
I wanted to make something for the boy but let's admit I am not really good at coming up with boy gift ideas. They made it easier for me though, they are both tattoo artists and I knew they like hardcore things for little D.
So, using my mom's fabric paint and using my drawing skills, I made him this playboy themed onesie: 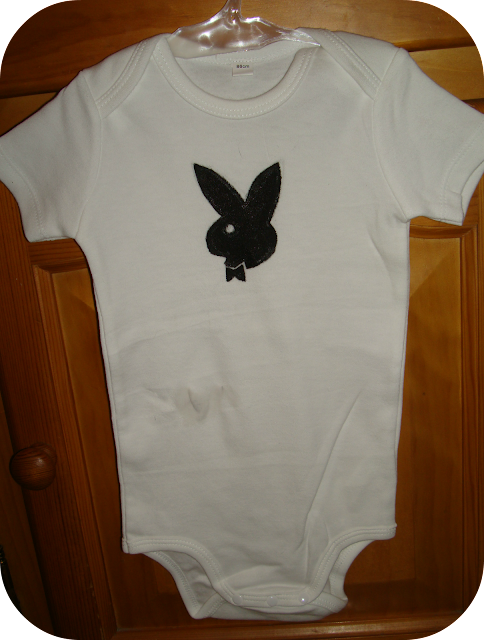 I'm planning to make a few more versions of onesies, but I have no clue when... as always...
at September 16, 2012 No comments:
Email ThisBlogThis!Share to TwitterShare to FacebookShare to Pinterest
Labels: Boy, Onesies

It hit me just a few seconds ago, so before I change my mind, I'm about to make a new commitment to myself, and I am making it public so I keep up with it.
A get a lot of clothes FOR FREE, some I like, some I don't... some I donate and some I get to turn into something new when the fabric is lovely.
SO, why on earth, do I have the need to buy any new clothes?! Seriously, there's a shopping center right by my house, and every now and then I go there with baby G. I always bring something home with me... either for myself or for her.
And I'm saying enough now. With my sewing skills and my free clothes I have enough to get myself new clothes at any time.
My commitment consists in buying NO more clothes (for me or G.) until the end of the year. I'll only make an exception if the item is really needed and not only wanted.
at September 16, 2012 No comments:
Email ThisBlogThis!Share to TwitterShare to FacebookShare to Pinterest
Labels: Commitments, Projects

A couple of weeks ago I bought the latest number of one of my favourite magazines, and I read about this contest. Participants are suppoused to create a baby mobile to enter. I thought it was pretty interesting and decided to try myself, too. The greatest thing about it, is that all the mobiles sent for the contest, will be donated to a child Institution. I actually wanted to participate with more than one, not to have more chances to win but to donate more than just one.
So, I wanted to make my mobile but was kind of running out of ideas. I tried to search for some inspiration online and ended up on a youtube video teaching how to make a native american inspired dreamcatcher. I thought that was very interesting and that I could do something nice out of it.
I totally re-created what I saw and learnt from that video. I used the same technique, but I used complete different colours for the dreamcatcher. It turned out like this: 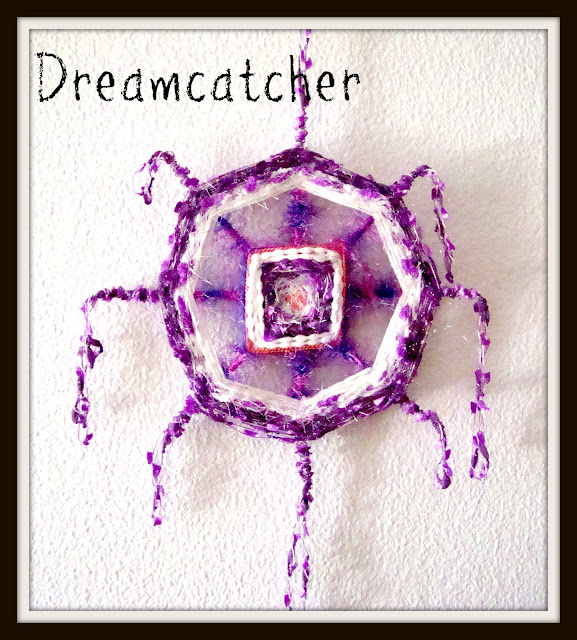 Then I had to decide how to turn a dreamcatcher into a nice baby mobile. And after some thinking I came with up with an idea for my project. At the edges of every stick I added a heart. Half of them were made of fabric and stuffed, and the other half were made of fabric decorated felt. 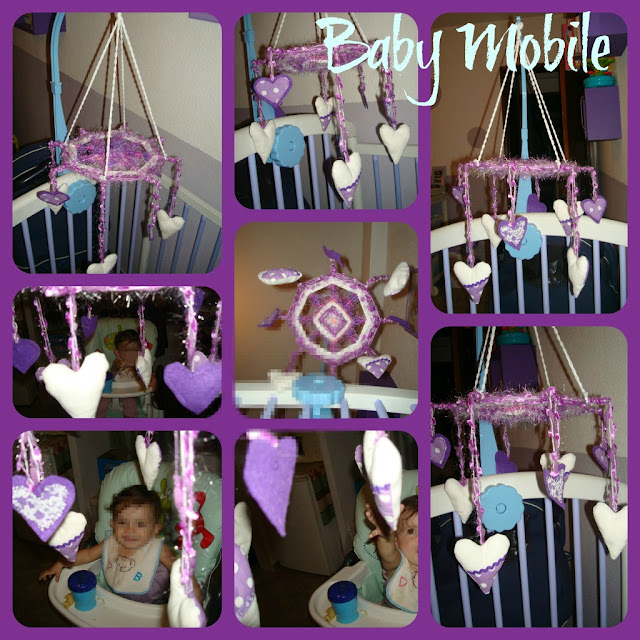 I loved it so much... and so did baby G. She wanted and would have played with with if I had allowed her to. I used her mobile support to take my pictures, it actually would wonderful in her room, actually the polka dot fabric was used in her blanket, pillow and curtains, and for a moment I thought I could keep this mobile and make another one for the contest. But nope, this is the one I'll send. I have until October 10th to do so, but I want to send it as soon as possible. It's already packaged!
Wish me luck, though I'll feel equally happy if I don't win.
at September 13, 2012 No comments:
Email ThisBlogThis!Share to TwitterShare to FacebookShare to Pinterest
Labels: Contests, Dreamcatcher, Mobile

Can I even call it a refashion? I did not spend more than 10 minutes to do it. I had a pair of pants that I didn't wear at all. They were too short legged for my taste. 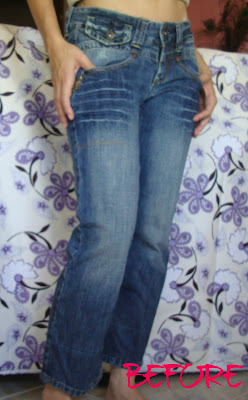 A while ago I had thought about turning them into  skinnies and were them in Winter with boots, but it's Summer now, and what I need mostly are Summer clothes, so the skinnies idea had to be put apart and I grabbed my scissors instead.
All I had to do was cut! Exactly... simple as that. So, I marked how much fabric I wanted to cut off and did it.
I got myself a new pair of shorts, which I have been wearing madly lately. 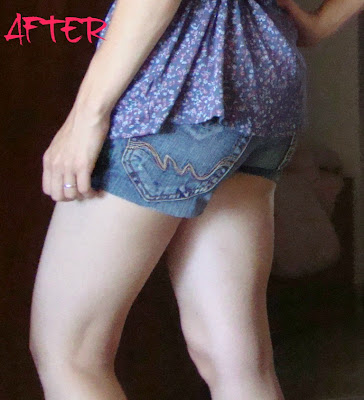 at September 08, 2012 No comments:
Email ThisBlogThis!Share to TwitterShare to FacebookShare to Pinterest
Labels: How to, Mom's, Pants, Recycling, Refashioning, Shorts

Have you heard of BlogBooker?

Haven't you? Well, BlogBooker is one of the greatest online tools in my opinion. It converts your blog into PDF in just a few seconds. So, if for some reason you're afraid you can lose all your content, be sure to keep your blog as a PDF archive. I do! I have two blogs, this one and one in my own language, where i mostly blog about my kid and family life. From time to time I use this tool, and I just did it, for both my blogs.
at September 03, 2012 2 comments:
Email ThisBlogThis!Share to TwitterShare to FacebookShare to Pinterest
Labels: Blogs
Newer Posts Older Posts Home
Subscribe to: Posts (Atom)