Dad was home today. It was his day off. The only one he has in the week. And having him around means, oportunity to take some nice shoots of us two together.

So after lunch we went out, letting the warm sun shine down on us. G. fell asleep on our way to a small village by the sea nearby. But, as she woke up we drove to the next town. They have an old castle there, with a beautiful garden. Before G. we used to go there a lot to take some nice shoots... of me! =) Mostly when I had any new clothes made.

She wasn't really in the mood for photos when we got there. I guess she didn't sleep enough, though she woke up on her own. But then I walked her around and she did appreciate the flowers and leaves. She couldn't stop staring.

I just LOVE the way the dress looks on her with the hat also. I was afraid it wouldn't turn out as I had imagined, but it was quite fine... not perfect though, not for me at least...
I guess it's not very clear on these photos, but her dress folds over in the front, and has a big black botton on the left side... I liked the detail. Do you? 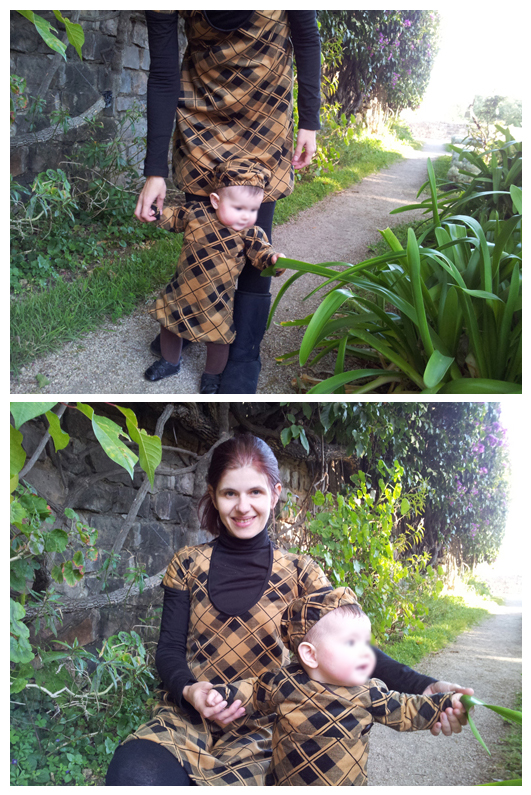 She can't stand still on her own feet yet... my little 7 month old! =) So, I have to be there holding her in every single picture.

My dress was much simplier... sadly, none of us thought about taking a photo of the back of the dress =(
I guess, I have to train my photography planning ahead!!! So I won't miss any details... Still, today we worked according to miss G.'s mood... which wasn't her best at all... she looks happy on these though, doesn't she?

There's some of this fabric left, so maybe sooner or later I'll do something else to match. Right now I am busy trying to come up with G.'s Carnival Costume... it has a private story attached, I'll tell you more later... I love sewing for children... really!