January Refashion Month Series with Pam from Threading My Way

It doesn't seem too long ago, but it's already 6 months gone since July Refashion Month. A series I'm hosting, with a month full of guests sharing their post about refashioning.

To kick off this winter edition of the series, I introduce to you the lovely lady behind Threading my Way, Pam. If you've been around for a while, you've surely heard of her before. Pam was also part of last year's guests, and her skirt refashion was quite a success. I am sure you'll enjoy reading about how she started refashioning, and revissit some of her greatest refashions.

I was thrilled when Magda invited me to take part in this year's House of Estrela Refashion Month. Last July's month long series was jam packed with fabulous refashioning ideas, so of course I wanted to join in again this year.

Refashioning is not something new. In days gone past, people made do with what they had. Items, including clothing, were kept until they wore out, probably having been mended many times before they reached the end of their life. And when a piece of clothing could no longer be worn, the reusable sections were made into something else.

Out of necessity, people were, in general, more resourceful than they are today and even more so during especially hard times. In the 1940s, my Mum made a skirt from a tablecloth. Here in Australia at that time, rationing was in force. Clothes and fabric could only be obtained via a coupon scheme. There was no such thing as keeping up with the fashion. 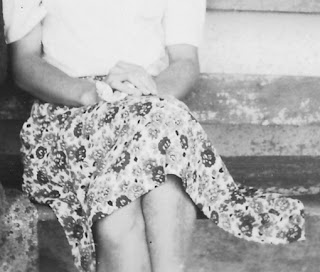 Fast forward many, many years and it's become trendy to refashion. I doubt that the word refashion even existed back when my Mum was making clothes from a tablecloth or whatever was at hand. I imagine it was called being frugal... simply a way of life.

Now-a-days we still refashion to save money, but it is not the only reason. The environment most definitely benefits when we recycle or refashion clothes, as opposed to buying them. Refashioning is also a creative outlet, where one can easily make a one of a kind garment that no one else is wearing.

Even though I've been sewing for a long time, it's only in the last couple of years that I've begun to refashion. It was actually my daughter who encouraged me to refashion when she suggested I take a favourite baby doll t-shirt dress and turn it into a bag. My daughter didn't get quite the reaction she had hoped for. I think I was rather negative. But if I make a mistake, there's no going back. I don't have a pattern. And my non-sewing (at that time) daughter, You can do it, Mum. If you can make.... this will be easy. You just have to... And so my first upcycled project was a bag.

Funnily enough, once I'd made the first cut in the fabric, I thoroughly enjoyed the process. My daughter gave me the encouragement I needed to get started with refashioning. 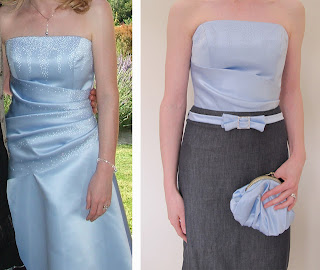 My most adventurous refashion was also at my daughter's request... refashioning her wedding dress. Yes, that's right, cutting into her wedding dress to make a smart, day dress. Again, I was apprehensive, but once I made the first cut, I was off and running. My daughter designed and I sewed. You can read about the process from my daughter's perspective and also from mine. 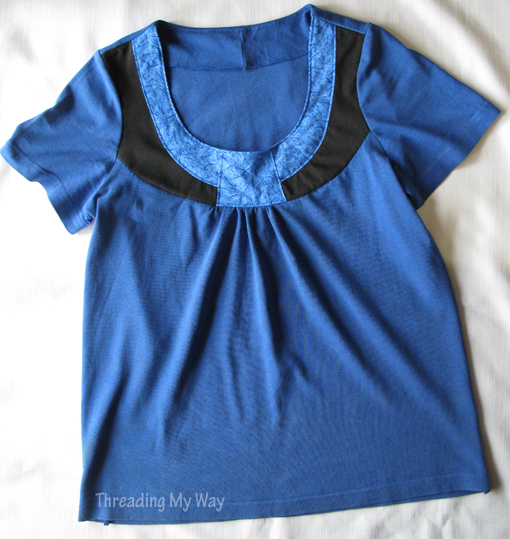 I don't often sew for myself, but the Rose t-shirt is one outfit that was for me. The blue fabric was once a man's large t-shirt. Often I just make up refashions as I go, but in this instance I used a pattern and was able to keep the original hems for both the bottom and the sleeves. 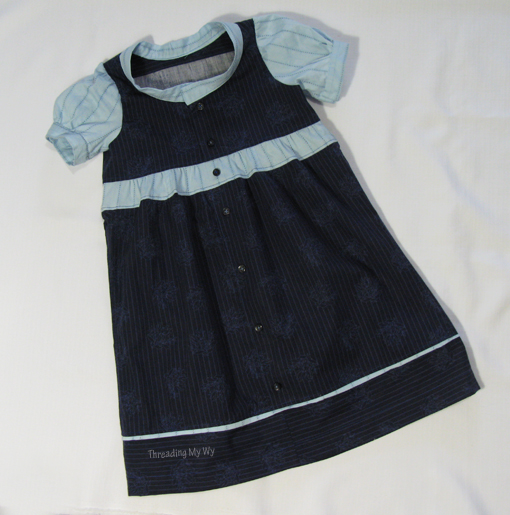 The shirt dress is probably my most favourite refashion. It's made from a man's dress shirt, combined with a woman's blouse. I redrafted an existing pattern to cut out the bodice and then used a tape measure for the rest of the dress. Whenever possible, I try to keep some elements of the original, and in this case, was able to keep the sleeves and the button placket. Obviously the sleeves needed to be made smaller. 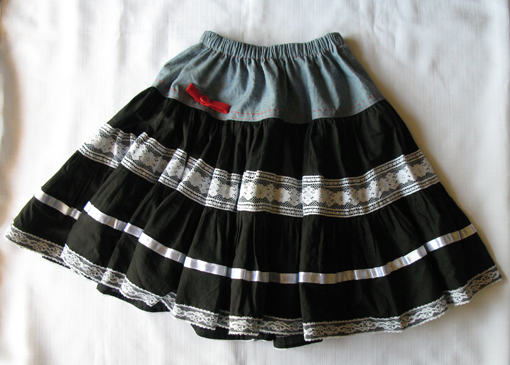 It's not a very good photo, but this gathered skirt was another favourite and was super easy to make. The denim yoke is from a woman's top and the black was once the bottom of a woman's skirt. 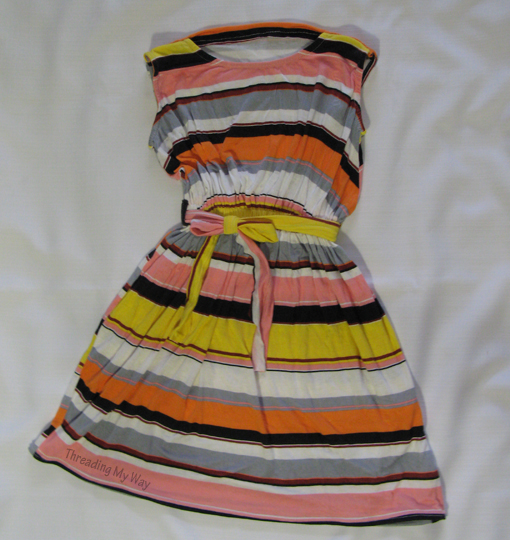 Refashions don't have to be perfectly sewn to be successful. Popularity with the little one who will be wearing it is probably more important than what you think of the garment. Turning a woman's dress into a stretch dress for a little girl is probably my most successful refashion, in terms of the number of times the garment has been worn. And it was a very quick refashion, too. 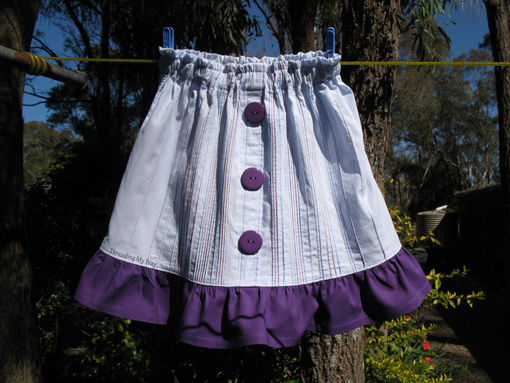 Men's dress shirts are fabulous for refashioning. If you come across good quality shirts, add them to your stash. Yes, I have a stash of pre-loved clothes, as well as a fabric stash. I loved the pintucks on the original shirt and was able to keep this element in the final skirt. If the project calls for it, I am happy to use new fabric in conjunction with the pre-loved clothing; in this case, the purple ruffle. The matching purple buttons were from a woman's cardigan. 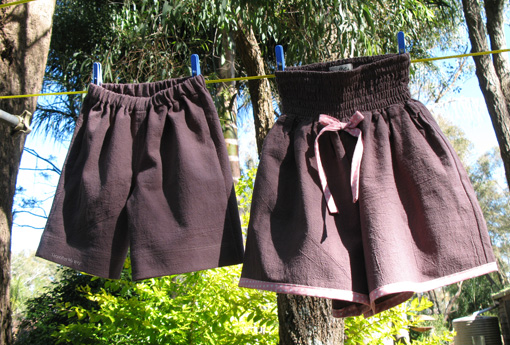 If you are lucky enough, you'll sometimes be able to make more than one outfit from the one garment. The culottes and shorts were made from one pair of woman's pants. Using a pattern, the boy's shorts were cut from the legs. The pants were simply used as fabric, because I didn't keep any of the elements of the original pants. The culottes, on the other hand, retained the waistband from the original. I simply cut off the legs, finished with bias and added a bow. The shirred waist is great, as it fits a wide variety of sizes, so there was no need to alter.

If you've never refashioned before, perhaps begin with a pre-loved garment you don't care about. You have nothing to lose and a lot to gain. It won't take you long to gain confidence and then you'll be hooked.

Thanks for inviting me to be a part of the House of Estrela Refashion Month, Magda. I'm so looking forward to the rest of the series.