Shannon from Googiemomma is our guest today. She's the incredible mom of 5 who sews for her kids and occasionally for herself too. She's creative and resourceful. A while ago she was one of the testers for my free blazer pattern (size 2) and I loved what she did. Today she left her fancy dresses and princess cosumes aside to share a very practical refashion with us. Enjoy it.

it’s been my m.o. since i started sewing: just the fun stuff. fancy dresses and princess costumes and bowties. occasionally a bag or a stuffed animal.

i’d gloss over those tutorials and patterns for things like basic t-shirts and stretchy pants and jeans and gasp! underwear! who? why? why spend my time on making something i can buy at walmart when i can spend it making fluffy fluffy skirts???

and then i had a moment of clarity, as i prepared to drop yet another $7 pack of  3 pairs of “princess undies” in my cart. i was annoyed—the two little girls basically share clothes, gigi being a peanut and elliot being our typical thick toddler googie—and with potty training in full swing we were going through panties faster than…than i don’t know what. but just way too fast. and $7 every few weeks starts to add up.

meanwhile, back at the ranch…i had an ever increasing backlog of “upcyclable” items—shirts and dresses piling up in drawers and baskets that i figured i’d be able to reuse for a sewing project eventually.

i pulled that pack o’ panties outta my cart quick as a wink and set off home to make my own.
shockingly, i learned it wasn’t hard at all. (i can hear you experienced sewists rolling your eyes). once i drafted myself a basic pattern and tweaked it a bit, i had four pairs cut and sewn assembly line style in about an hour.

for freeeeeeeee.
which is my favorite number.

also shockingly—those homemade panties are dang cute. and watching their little bums run around in my handmade underpants was rather satisfying, even if it doesn’t get quite the same amount of attention from others that a handmade dress would. (hopefully. truth be told, i have rather exhibitionist daughters. :/  )
i also learned that sewing is sometimes useful for more than just sparkly dresses. it can actually save my family money, instead of being an expensive hobby. lol. i kid. really i’ve always tried to spend very little on my sewing, so it is a cost saving measure for our family. but this opened my eyes to the fact that taking the time to make some of the, ahem, “boring” stuff can really make a dent in our bottom line.

and i’m finally putting some of those knit t’s i’ve been hoarding to good use! upcycling/recycling either your own castoffs or thrifted/gifted items just makes good sense!
so, who’s ready to make their own panties? well too bad, you’re on your own for that. but if you’d like to make a pair that will fit a child between 2-5 depending on their size than i’ve got a free tutorial + pattern for you!

your only supplies are:

+ a pile of knits. somewhere in there try to have a thicker white cotton. i had a rib knit white tank, and this
was perfect as a liner for the crotch. (i just said crotch. on the internet)

+ elastic. i used both F.O.E. (fold over elastic) and regular 1/2” elastic that i have on a big spool. the F.O.E. does look nice and professional, but i found the regular stuff much easier to work with.

+ scissors, thread, machine, pins. what you don’t need is a serger. it’s nice if you have one, but you can do these perfectly well without one.

+ this pattern + this tutorial, over on my blog!

there you have it! go forth and sew more than just the pretties, and save dollah dollah bills ya’ll, and cover nekkid bottoms! (the world will thank you) 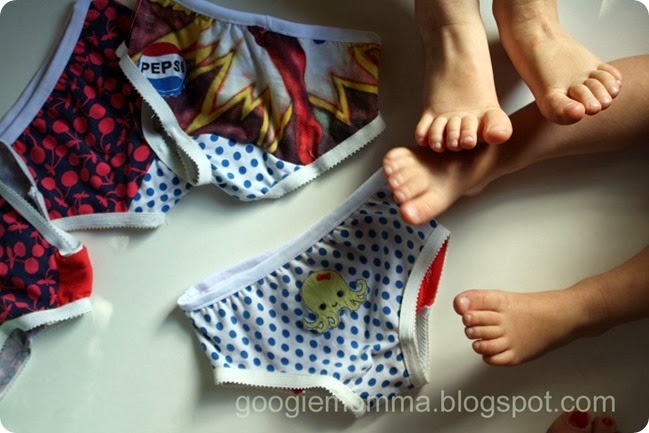 how dare i try and take photos without them…;)

MAGDA—thanks so much for letting me be a part of your January Refashion Series! what you guys don’t know is that i totally flaked on magda, and thought i was scheduled a week AFTER when i had actually scheduled myself! graciously, magda still allowed me to squeeze in my post at the end!
so thanks, lady! you’re the best! how about a handmade pair of panties from one of my hubby’s old t’s as a thank you? no? too much? ;)
at January 26, 2014
Email ThisBlogThis!Share to TwitterShare to FacebookShare to Pinterest
Labels: Girl, Guest Posting, Refashion Month 2014, Refashioning, Toddler, underpants