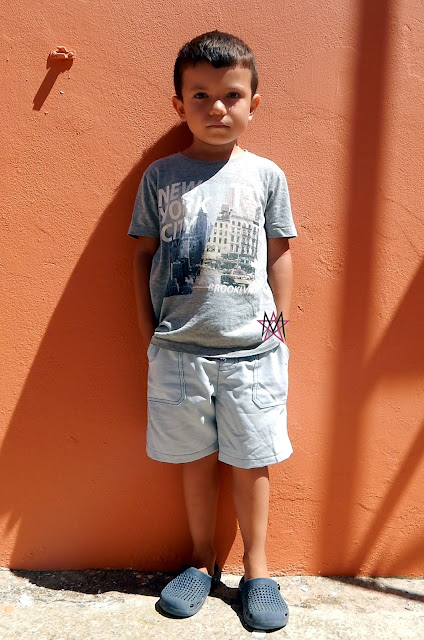 My friend Susuana, by Suco by Susana has a new pattern out there, it is the Sagres pattern, in her words "a relaxed fit pants or shorts designed for woven fabrics, with elastic waist and no zip or closures for easy getting dressed". This was originally designed to be part of One Thimble magazine, and you can now find it in her shop. 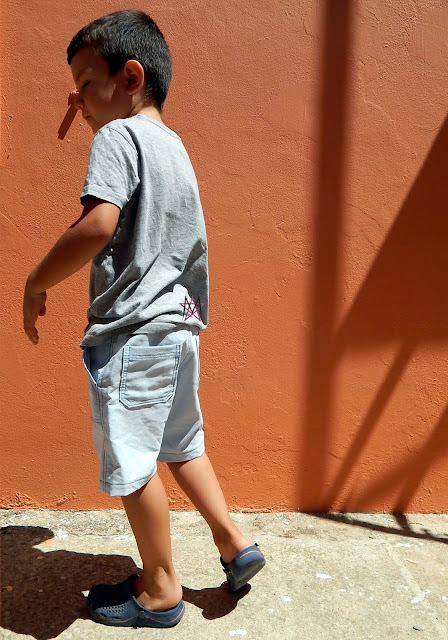 Again, I was lucky to be part of Susana's testers group and I really enjoyed making these. Actually I made a pair of pants too, but they turned out too baggy on my skinny boy, they will fit later though, so hopefully, I will remember to take some photos and share them with you. 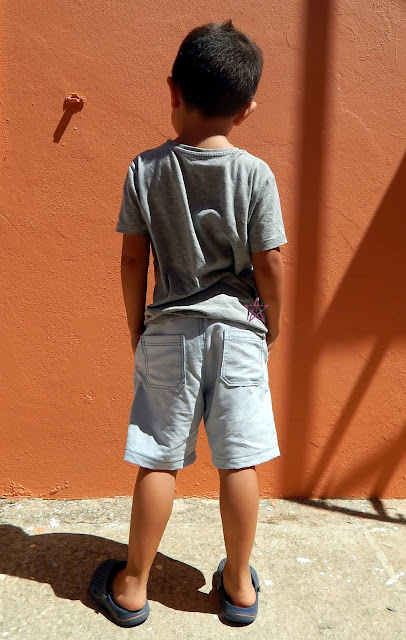 The shorts fitted pretty well though, and he got to wear them quite a few times until the weather got cold enough to set them apart - for now. Because of the elastic waist, I am sure they will still fit next summer and he'll be able to still enjoy his cute shorts. 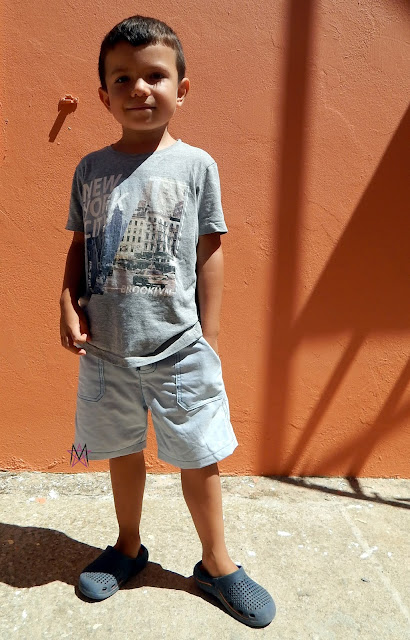 I failed to photograph the before, but this was a chambray men's button up shirt that I refashioned into the boy's shorts. I used a much darker thread while sewing to achieve some contrast and try to make this even more interesting. As always, I love to sew with Susana's patterns, she's very professional in her work, and her finishing details stand out. If you were to ask me for a single designer to recomend you, I'll surely point her out. Her designs are actually day-to-day pieces, the kind my kids wear the most. Check her blog out, for more pants and shorts inspiration (boys and girls).
at October 25, 2020 No comments:
Email ThisBlogThis!Share to TwitterShare to FacebookShare to Pinterest
Labels: Boy, Pattern Testing, Refashioning, Shorts, Upcycling

I can't say that underwear is THE thing I've been sewing the most around here these days, because I'd be lying, only because masks requests have been more than many, and I just can't say no. I guess I could say that underwear, is indeed the second most sewn in this house for the last couple of months. I don't know if anyone remembers I did a one year no buying clothes back in 2013, and recently I just felt like I needed to do something like that again, I was going no control lately. OK. I did these underwear pieces before I made the decision again, but I guess somehow I was already made up about stopping the waste around here. Waste of our money, waste of my time... So, when I say my kids always had and still have a lot of clothes, I's no joke, or at least, it looks like too much for me, anyway. They do have plenty enough to go through each season without the need to buy anything... except for... yeap... drum roll... underwear! They get lots of hand-me-downs from their cousins and also some friends, so when each season changes, I know I am prepared. However, underwear is something that isn't passed away as the rest of the clothes and they get shorter on these, eventually. 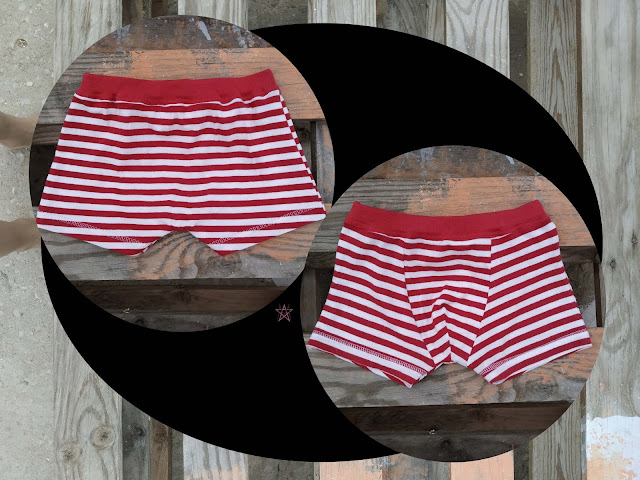 So, this brings me to my post today. A couple of weeks ago, I got both my kids a few new pieces - well, only one for him, and a new set for her, but more are coming for him, that's for sure. Anyway... I had bought my son three new boxers and one day, looking at them, I thought "I should do this, instead of buying more", and I did. I used those RTW boxers to draft the pattern from, making it a bit bigger to last a little longer. Then I grabbed a striped shirt from my refashion pile (I should refashion more often again, shouldn't I?), and in a blink of an eye, I had the boxers done. For the waistband I used leftovers from a pre-loved baby onesie I didn't even know I still had. I found it on a quest for red knit fabric, on my own stash.
at October 21, 2020 No comments:
Email ThisBlogThis!Share to TwitterShare to FacebookShare to Pinterest
Labels: Boxers, Boy, Briefs, Girl, Socks, underpants, Underwear
Newer Posts Older Posts Home
Subscribe to: Posts (Atom)