This isn't the 4th refashion I told you I was working on. I haven't finished that one yet. The month isn't over  and i'm still hoping I'll amke it to the four refashions in a month. But I did make a fifth refashion if you want.  Uhmmm... not actually a refashion, it was more an upcycle.

A few weeks or is it months now? ago, I brought a huge piece of foam from my parents to make a little sofa for my daughter's bedroom. I did cut the foam but never got around to finish it. And it was my sister's fault (or I like to think so), because she had a sofa from her son which was left in the garage, for too long. It was old, dirty and stained. It was total garbage for her... but not for me. I took it off and the foam wasn't as bad as the cover, so what would I do? Of course, I had to give it a new life, and here's how the little sofa went from this: 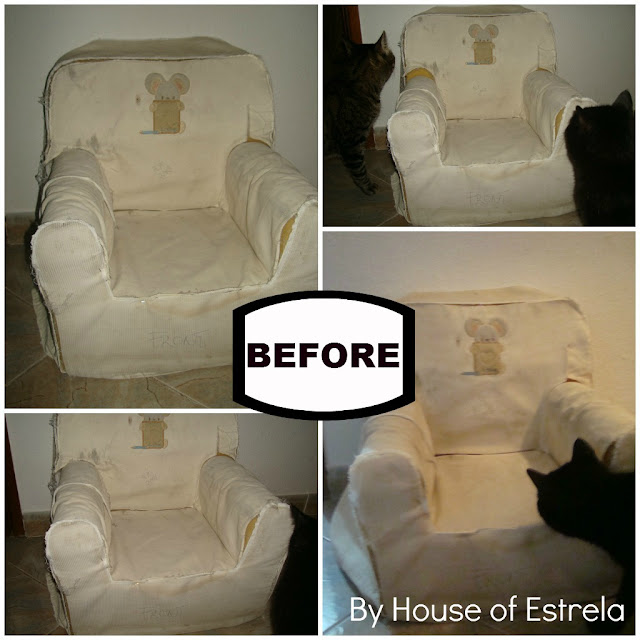 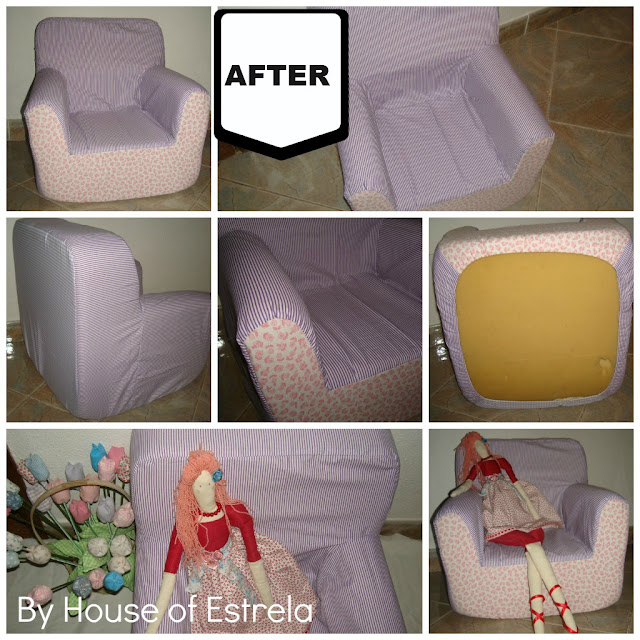 I had it home for a while now, but it was taking it's time. I don't know what got hold on me last night but I was already in bed and I had to jump out and DO something... anything. I did some household shores and then I went straight to the sofa cover.
I forgot to take a photo before I started ripping the original cover apart. That's why I had to pin it in place to take my before photo after all.
As I was ripping the original cover I was thinking to myself, how the hell would I be able to make the new one again. i thought I wouldn't know which part should I stitch to which part, but once I had the new pieces cut i realised it would be much easier than I first thought.
Before going to bed (at about 2 a.m.) I left my pieces cut and pinned, so all I had to do today was sew it together. On the botton, I used a cord to pull the cover into place. It was made in a blink. 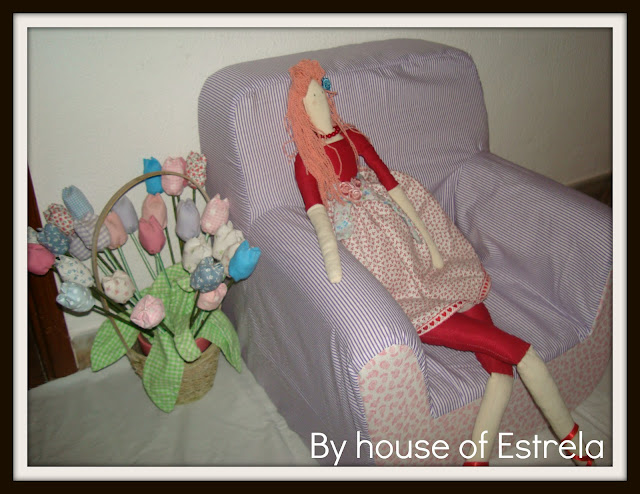 My Tilda doll seemed to like it very much. She tried to used it as her own. But I am not still 100% satisfied with it. I want to add an application using the same pink fabric, almost in the same place of the original bear. I thought maybe I can stitch something, but that might take a little while. And I want to make a matching decorative pillow to put on the sofa. When? I can't tell! hehe*
at July 30, 2012 No comments:
Email ThisBlogThis!Share to TwitterShare to FacebookShare to Pinterest
Labels: Fabric dolls, Fabric Flowers, Mini-Sofa Cover, Nursery, Recycling, Toddler, Upcycling

As I said in the last post, the third refashion was something really simple. I didn't even have a picture taken of the before. You know I tend to forget things easily, and taking pictures before cutting is one of them.

So, this refashion was kinda started for a while. When I started making those pants from V.'s shirts for my little pie, I had cut two of my own too. One of them I did finish, but the other was laying somewhere waiting for me to remind myself about it again.

It wasn't actually mine, it came in a large bag of used clothes from my mother in law's house, so it might have belonged to one of V.'s sisters. It was a top, just too colourful for my taste. It wasn't exactly new either, so I couldn't see any better use for it than to turn it into a sort of walking around the house or pajama pants for G., just like I did with these here, and here. 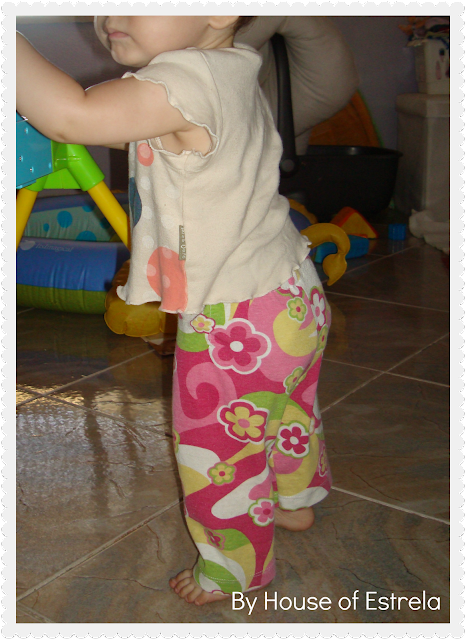 And while we're here, I realised I didn't share the green pants I made her out of a t-shirt of mine. I only showed you the ones I made out of daddy's clothes. Well, not that you're losing that much, they were all made the same way... *ahah* it's just my ego that needs to show off with every little thing I create. 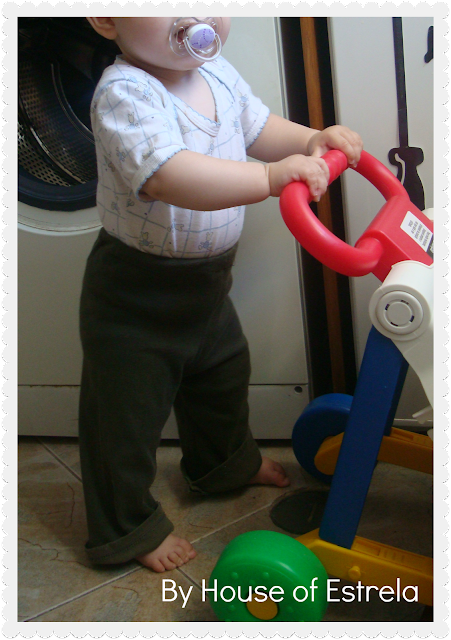 Going through the photos I found one more pair: 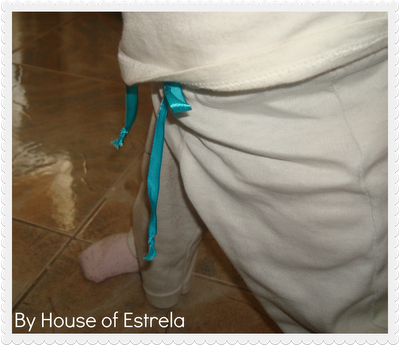 These were made out of her dad's underwear shirt. I made two pairs with it, and since they are so light, they are perfect to wear as pajamas.
at July 25, 2012 6 comments:
Email ThisBlogThis!Share to TwitterShare to FacebookShare to Pinterest
Labels: Girl, Pants, Projects, Recycling, Refashion Month 2012, Refashioning

Sorry, it's been so quite around here when I thought I would have a post full month here. Let me just be honest: I haven't been feeling like blogging that much, although I have so many things to share.
I was supposed to have a new guest blogger last Monday, but I did not get anything from her and I postponed my own post too.

Well, to make the second refashion of the month, I used a t-shirt I got from a female motard meeting I went with my sister back in 2010. I am very petite, so the size 14 yrs was too big for me. I kept the t-shirt bacause I always thought I could turn it into something cooler. But not only until now I have touched it again.
I also had a sweater someone had given me - but I didn't really like - which I kept to make something out of it. I didn't have anything specific in mind. So, when I went looking for the t-shirt and it came across my eyes, I had no doubts what I could use it for. Or at least a part from it.

Here's what I used and first steps I gave to make it: 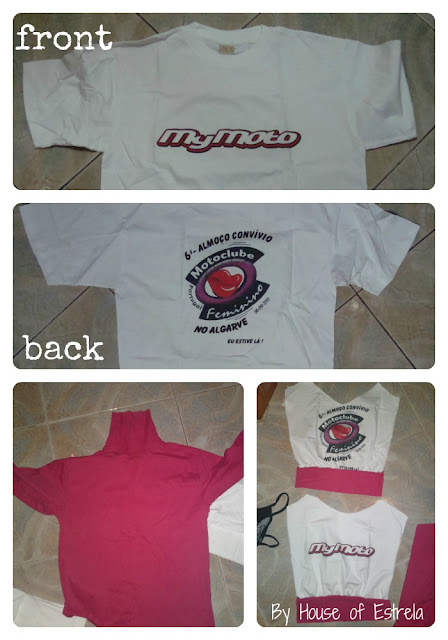 I used the back of the t-shirt to make it the front, and so the front was turned to the back. "My Moto" is a shop and I didn't want publicity on the front.

Here's what I had when the whole process was over. Unfortunately it's a little too baggy for me. I wanted it a bit baggy, not a lot but missed my point. So I either give it to my sister or I have to make it a little smaller yet. 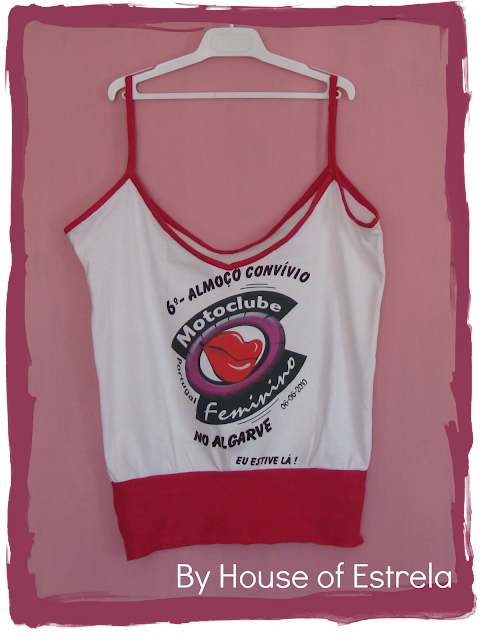 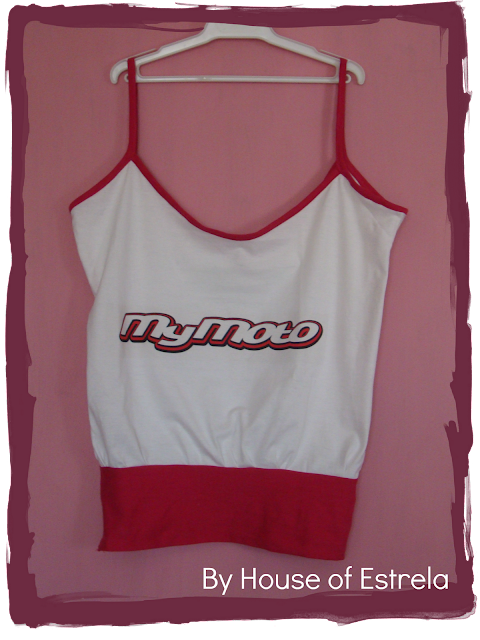 I made a little refashion for week 3, and the 4th refashion is taking shape already. So, the month is not yet over, and I am already happy that I did it... let's hope I won't mess it up by not finishing the 4th before the end of the month... heheh...
at July 25, 2012 No comments:
Email ThisBlogThis!Share to TwitterShare to FacebookShare to Pinterest
Labels: Mom's, Recycling, Refashion Month 2012, Refashioning, Top, When things go wrong

Today, instead of my latest refashioned (will post it soon, don't worry) I am introducing you to MaryBeth from
SecondHand Couture
She's got amazing ideas on her blog, blogging tips, fashion style, etc. So be sure to visit her and leave some nice words.
This is the first time I am having a guest posting at House of Estrela, but there are more to come pretty soon. I hope you'll all enjoy it!
Love, Magda E.

My name is MaryBeth, and I blog at SecondHand Couture. I am so happy to have the chance to guest post for Magda. She is a creative and talented blogger, and I love getting ideas and inspiration from her.

I recently have wanted to make some embellished bobby pins. I originally wanted to put pearls on the end, but I didn't have the right supplies. Not to be discouraged, I raided my button stash and came up with these.

Using hot glue, a needle, and thread, I got to work! I hot glued each bobby pin to the button with a small amount of hot glue, just to keep it stable. Afterward, I doubled up my thread through a needle and  wound it around the pin through the button. When I had sewn enough that it wasn't moving much, I tied off the thread and hot glued the button some more. These buttons aren't going anywhere!

I found that the buttons with one hole on the bottom of the button worked best for this project. I tried some of the standard buttons, but failed at it. Haha.

I ended up making six button-bobbypins, and I'm excited to wear them! I think they will look great with my hair down, but they will also add a fun touch when my hair is in a bun.

From my last refashion, part II: The photos!

In my last post I have only uncovered a little bit from the first refashion I made on July. I didn't want to show you the whole thing before, because it was late and dark, and I wanted you to see cute pictures of it, because it deserves to be shown the best way possible. hehe 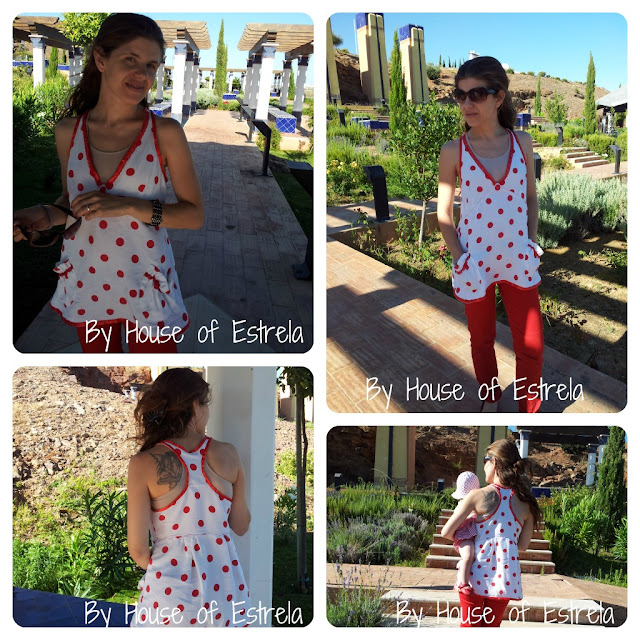 So, as promised, here are better/full pictures from my latest refashion. I really like it now.

I've been working in the next piece, I can say that I have used a t-shirt and a sweat-shirt for my next refashion. It's something I've been wanting to make for a while, and I am so happy I am finally getting there. Just a few details left to be done and I'll succeed on the second week of my self challenge. Of course, I will show it to you, as soon as possible too.
at July 13, 2012 9 comments:
Email ThisBlogThis!Share to TwitterShare to FacebookShare to Pinterest
Labels: Mom's, Recycling, Refashion Month 2012, Refashioning, Top, Tunic

It's about time to bring this blog back to live... it's been so insipid it bores my own self.

It is officially opened the Refashion Series here at HOUSE OF ESTRELA. My goal of making at least one refashion every week during this month, started at the first of July.
Today, one week later, I am HAPPY to say, I have succeed the first week. And right on the last minute I finished my first piece. And since I have finished it by night, I will not post full pictures of the piece just yet. I will try and take some nicer photos on day light tomorrow.

My first refashion consisted in turning an old pair of pants into a brand new top for myself. Here's a little taste as you wait for nicer photos. 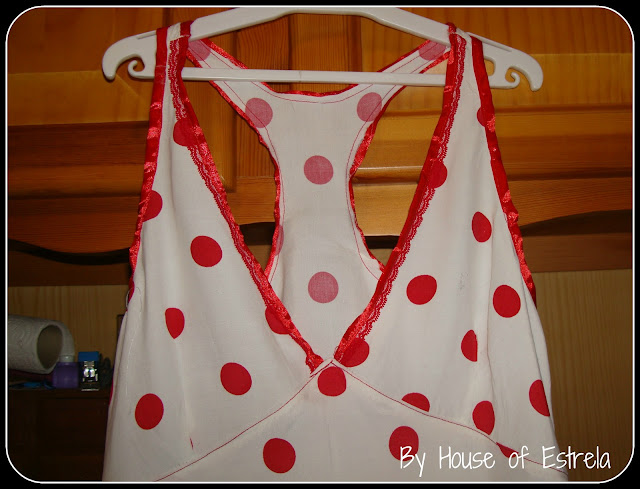 There was some fabric left - not much though - so I've been wondering: should I make a matching piece for little G.? There's so many clothes left to recycle, maybe I should forget about those scraps. I have to start thinking about the next project. Are you following?
at July 09, 2012 2 comments:
Email ThisBlogThis!Share to TwitterShare to FacebookShare to Pinterest
Labels: Mom's, Recycling, Refashion Month 2012, Refashioning, Top, Tunic
Newer Posts Older Posts Home
Subscribe to: Posts (Atom)